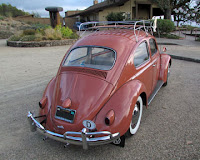 My parents encouraged education through experience and took my brother, age 14, and me, age 10, for a European vacation in 1958, a time when traveling overseas was not commonplace as it is today. Pop ordered a coral colored Volkswagen which we picked up from the factory in Germany, drove around Europe, and had shipped back to the United States at the end of our summer adventure. It was the first coral Volkswagen in our county and Mom drove it until she passed away at age 89. Niece Christine is now its caretaker. 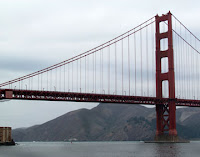 We visited landmarks and cathedrals, but the experiences that made the biggest impression on my young mind came from seeing massive paintings in heavy ornate frames and statues of people balanced on pedestals. Second to the museums, I adored the fountains and public art, a concept that was new to me having been raised in California where few things were older than a hundred years. I already adored the Golden Gate Bridge in San Francisco, and became equally fascinated with the Eiffel Tower and Leaning Tower of Pisa. There is no doubt in my mind that our travels influenced my interest in art, architecture and color. 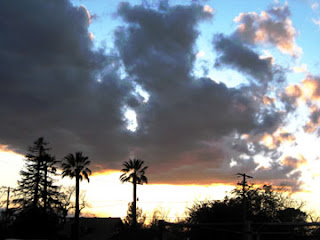 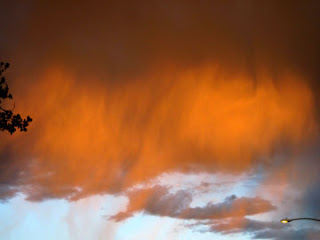 On Thursday night last week I drove beneath thunderous Northern California clouds to an event in a neighboring city. The clouds resembled those painted by the masters, the reflective quality of their colors and purposeful brushstrokes clashing waves of orange on the sky. For the thunderous appearance overhead, it was unusually calm, neither warm nor cold. There was no rain when I left my car and walked toward the door leading to the upper room. It was quiet inside the little Methodist Church. Rows of people represented a mixture of ages and races, large and small, young and old. From the choir loft, a baritone voice spoke and one-by-one, 13 costumed men rose from their positions scattered throughout the congregation, walked to the apse, and took their position at a long table covered with a white cloth. The church lights dimmed and for the next 30 minutes, each of the 12 Apostles rose and, in the spotlight, told their story. 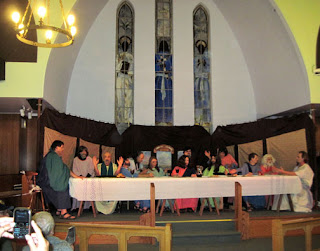 Although my mother was a founder of the Presbyterian Church in my hometown and I attended church until I went away to college, my limited understanding of religion is not based on sermons or scriptures, but primarily on experiences, movies, festivals, and art. Every Easter season after all the church activities, mom and I watched the silver screen spectacles on television, one-after-another. Most years they were scheduled chronologically, ensuring that the parting of the waters came before the burning bush. My first one-on-one interface with art and religion came when mom’s church commissioned an artist to create a wood carving to serve as the focal point in the church. Mom signed me up for art classes and on Saturday mornings we made the pilgrimage to his studio. We children sat around a work table, our little hands positioning colorful tiles on Masonite creating mosaic pictures, while our parents spoke to the artist about the personalities of the 13 life size figures he meticulously chiseled from a monstrously large block of wood. Before leaving the studio, adults and kids alike collected bits of wood shavings from the floor as if gathering mementos from a shrine. 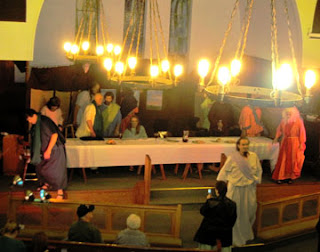 In Florence when told there were four “Last Suppers” within a few blocks of Santa Reparata International School of Art, my face must have expressed astonishment. “Really,” I said to Dr. Carey Rote, the art history professor. The look on her face indicated that she thought I certainly must be kidding. How I made it through art history class in college many years ago is a mystery because until her comment, I subconsciously considered the Leonardo DaVinci painting to be “the only” Last Supper. In the little Methodist church that stormy night, I faced another realization. I always imagined the 13 gesturing figures at the dinner table as two-dimensional and never thought of them as people sitting right next to me, who got up and walked to the table as these 13 did. When the dramatization was complete, the disciples helped pass the communion trays and then returned to sit in the pews to participate in the closing hymn and prayer, just like ordinary people.
The other perplexed art history related facial expression was Barbra’s at my response to the question she posed after we visited five or six Florentine art collections, “So, how do you like the paintings?”
“I’m really impressed with the techniques and the color and the size,” I replied with excitement, “but I’m getting sort of tired of the religious theme.”
I can just imagine her thinking, “What did she expect? Artists were commissioned to paint Bible stories.”
Fortunately, neither of these art experts scolded me for my ignorance of history, that without religion, art would not have flourished. 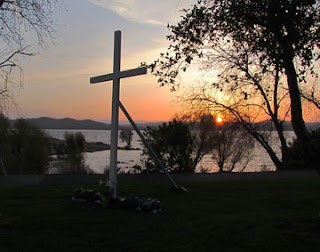 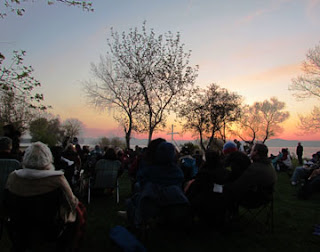 This past Sunday morning, I woke early and drove to the neighborhood lake where “Digger,” the local undertaker, and his family have presided over the nondenominational Easter Sunrise Service for more than 35 years. Dressed for the chill and holding steaming mugs of coffee and cocoa, a different group of young and old sat quietly in lawn chairs. We listened with interest as Digger spoke and sang, and we watched the sun glide upward from the other side of the lake, illuminating the mountains with a blush of tangerine. 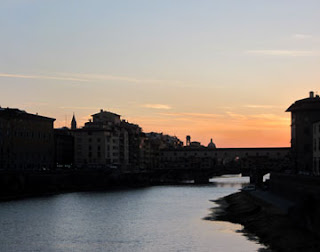 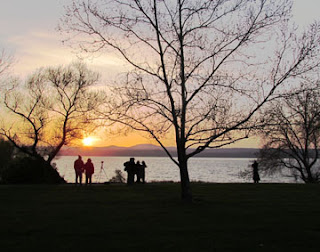 Later at home, I recognized an uncanny resemblance between the sunrise photos I had just taken and a photo I snapped at dusk of the Ponte Vecchio spanning the Arno River thousands of miles away. Both shared a translucent orange quality I find irresistible – the colors I tested with 24”x24” paint samples on my house until I was satisfied one was as close to an ethereal and unearthly tone as my eye could imagine. 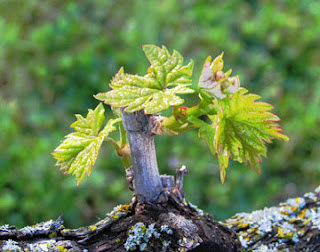 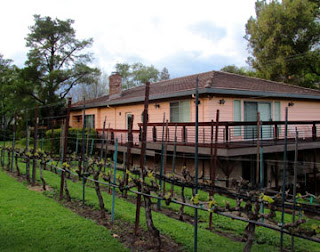 The same fleeting orange haze that claims the beginning and the end, the tumult and the calm, provides a delicate nourishing balance… its glow embracing us with a soft farewell at sunset and a warm hello at sunrise. In reflection, I see orange as a significant color repeated throughout my childhood, the primer color for the canvas of my life, the color that keeps me safe and hopeful. Even on my home it serves as a promising backdrop for renewal – last week’s Primitivo bud break predicts a grand season of growth leading to a fruitful 2012 harvest.
Posted by Ingrid Lundquist at 6:41 PM