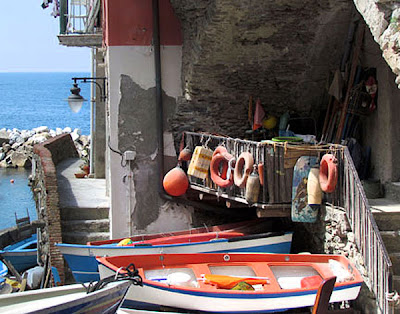 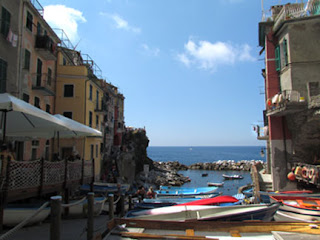 Riomaggiore, a 40 minute train ride from Monterossa, is the fifth and southernmost charm in the Italian coastal bracelet called Cinque Terre. The word Riomaggiore means “river gorge” and describes the town built into the side of a mountain once cut open by water. It is a medieval commune with tower homes, tall houses with two or three rooms on each floor, terracing their way to water’s edge. The natural steep wedge in the landscape creates a funnel shape, allowing the town to start at the hilltop and gently pour itself into the clear blue waters. Slabs of alabaster and marble form a sea wall which shelters a tiny calm harbor reminiscent of a child’s bathtub filled with toy boats. Both the hilltop elevation and seaside access provide breathtaking vantage points. 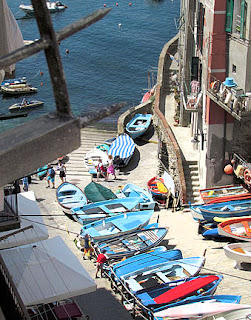 With the exception of five or six tourists, on this particular day the little village sits lifeless, like a perfectly outfitted movie set anticipating the arrival of the actors and film crew. A side street waits patiently for the Hollywood scouts scouring Italy for locations to double as scenes for a remake of It Started in Naples. I look down the alleys to catch a glimpse of Clark Gable in shirt sleeves, suit jacket slung over his arm. I look into doorways in hopes to catch a peek of Sophia Loren wearing Italian housewife garb, circa 1960, using a straw boom to sweep dust out onto the street. 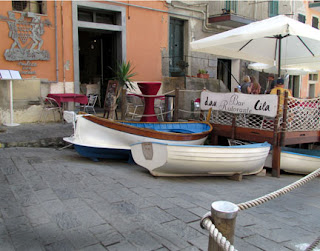 “Hey Mister,” I think I hear from the next block and look to see if Nando, a preteen boy, is begging for cigarettes as in the movie. “Hey Mister, I carry your bag,” I imagine him saying, grinning and nodding his head. There is no one there, but I have a vivid imagination fueled by the big screen and my travels. My folks brought me to Italy when I was eight. I was mesmerized and, as a hyper-impressionable child, I absorbed the colors of the real and celluloid scenes of Italy to be used later as the backdrop for my adult life. 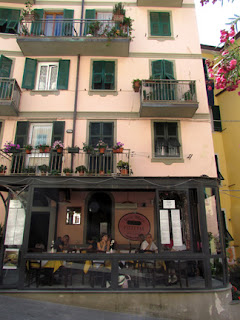 Visiting Riomaggiore is a déjà vu experience. I’ve been here before, if not to the streets of this exact village then to the purposeful streets of another where my lazy meandering turns the scrapbook pages of the towns which draw breath from the sea air and where the sun functions as a camera flash. Here time stands still: brightly painted row boats and stacks of pastel buildings instinctively know how to pose for photos. The abundance of everyday props, in the way of small fishing boats and fishing paraphernalia, reinforce the fact that there is nothing pretentious about this painter’s pallet of a town – there is no time to be pretentious while tending to the daily chores. 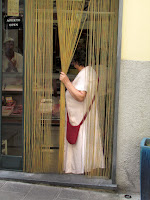 The absence of people, on one hand, causes the heart pounding excitement of taking a private behind-the-scenes tour and on the other causes the queasy uneasy feeling of walking through a ghost town. Up another street, laundry dries on clothes lines hanging innocently over the heads of tourists. In the quiet, even leather sandals sound loud brushing against the cobble stones and the air whooshes with a thickness like walking through veils of sheer curtains. Although, everything appears to be in stop action, left exactly as it was when the heat of the day forced a mass retreat from the streets, the boats bobbing in the water and the wet sheets flapping in the breeze offer every indication that human beings lurk behind the thick paint-peeled walls. 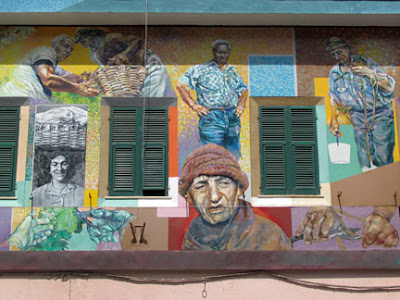 On the hill I find signs of activity. A lady holding the spaghetti-like curtain at the entry to the butcher shop could have been the inspiration for Sophia Loren’s movie character. Higher on the hill, and off the beaten track, there is a piazza where a few townspeople gather and older children play. A huge mural covers the entire side of a building; it has a man with the face at least 6’ tall. 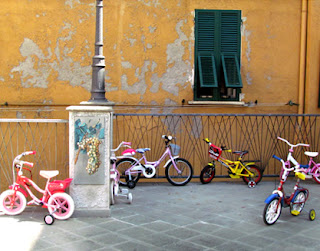 Between the children counting coins on the steps and the larger than life artwork, there are signs of younger children. I snap a photo of a still life I call “Bikes with Training Wheels Abandoned at Naptime.”

The photo is part of the invitational show entitled “The Art of the Bicycle” at the Milk Gallery in Sacramento, CA. 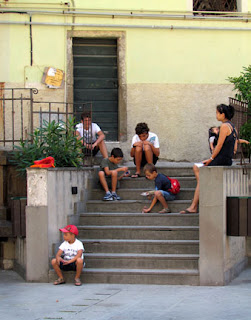 As the day rolls on, I’m just happy to linger in an outdoor café, savoring the fresh catch of the day, sipping a glass of the local sweet wine called Sciacchetrà, and listening to the soft shuffle of rope soled shoes as the fishermen drift up the cobbles toward the hilltop train station. I’ve heard stories of tourists caught up in the calm of Riomaggiore and missing the last departing train. Next trip, I plan to be one of those people hypnotized by the easiness of the solitude in this little fishing village built in the river’s gorge.
I hear a whistle and look over the rim of my wine glass to the street. “Hey Lady,” says the young boy in a red cap who I saw earlier counting coins, “I carry your bag.”


Side note: A trivia site on the internet mentions that the young boy who played Nando in It Started in Naples was born Carlo Angeletti or Marietto Angeletti and according to director Fred Zinnemann's 1992 autobiography, Marietto, who also appeared in Zinnemann's "Behold a Pale Horse", grew up to become a physician in Italy.
Posted by Ingrid Lundquist at 7:29 PM No comments: